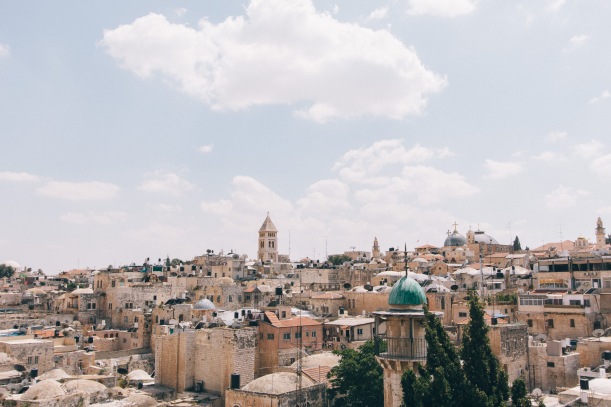 This is the story of a spiritual seeker, a search for unconditional love, and a powerful encounter with Papa God. The story is true; that seeker was me.

“You’re a lovely young woman. Your mother must be very proud of you.”

His words struck her like a sledgehammer, causing her heart to jolt violently in her chest.

She took a mental snapshot of the scene before her. The Wailing Wall, the diverse medley of people, milling around under the hot sun, and the middle aged Jewish father, his eyes smiling kindly at her from beneath his traditional orthodox hat.

Why would he say such a thing? She had merely asked him for directions to the Dormition Abbey.

Something about this city caused her head to spin. What a volatile mixture of emotions surfaced, as her senses trembled at the wonderful assortment of sights, sounds and smells.

Anger, cynicism, excitement, joy, danger simmering beneath the surface at every turn. Sleeping under the stars on the roof of the hostel, jostling past the tacky souvenir shops of Via Dolorosa, illicitly walking the city walls at night, taking the early bus tour for Masada sunrise. This city seemed to masterfully combine hate and love, war and peace, trickery and authenticity.

Scurrying away to rediscover the quiet sanctuary of the church, she couldn’t escape the man’s words. Was he a mind reader? She had no experience of anyone saying they were proud of her. She had never been a good, quiet, submissive type of girl; certainly not the kind of girl to cause her mother to feel proud.

Fleeing into the stillness of the church, she sat down, still shaking with emotions she couldn’t comprehend. As the tears started flowing freely, it seemed to her that she was running out of bolt holes. The deluge of pain was becoming uncontainable.

Where was there left to run and hide? Restlessly moving onwards, without direction, wasn’t working. Even if she travelled to the far side of the ocean, settled in a foreign land, reinvented herself again, she knew that, ultimately, there was no escaping herself.

A black robed figure approached her, gently interrupting, checking if she was okay. She guessed he must be a priest or monk. Here was unwanted kindness intruding again. She politely brushed the intruder aside. Solitary tears in this place of refuge were strangely comforting, more desirable than human kindness.

For a few fleeting minutes, she had felt something – or Someone? – reach into a dark place in her soul, bringing illumination and warmth, but… the internalised critical parent was still mightier than hope. When the flood finally ceased, she wiped her eyes, forcibly shoving back into the recesses of her heart any flicker of belief that unconditional love existed.

“Weeping may last through the night, but joy comes with the morning.”

It was a few years after the encounter in Jerusalem that she stopped running long enough to look into the eyes of unconditional Love.